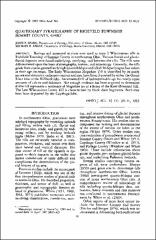 Borings and measured sections were used to trace 3 Wisconsinan tills in Richfield Township of Summit County in northeastern Ohio. Various fluvial and glaciofluvial deposits were found underlying, overlying, and between the tills. The tills were differentiated upon the basis of stratigraphy, texture, and mineralogy. Generally, the tills grade from coarse-grained with high quartz/feldspar and alkali feldspar/plagioclase values as their age decreases. The Early Wisconsinan Mogadore Till is identified by its sandy nature and dolomitic carbonate content and may have been deposited by either the Grand River lobe or the Killbuck lobe. An unnamed till of indeterminable age has nearly equal amounts of calcite and dolomite. Not enough evidence has been acquired to determine if this till represents a readvance of Mogadore ice or a facies of the Kent (Navarre) Till. The Late Wisconsinan Lavery Till is characterized by black shale fragments. Both may have been deposited by the Cuyahoga lobe.