Comparison of Food Resource Removal by Animals in Forest, Old-Field, and Ecotone Habitats 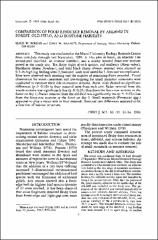