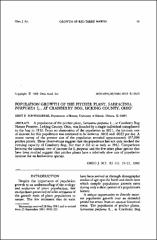 A population of the pitcher plant, Sarracenia purpurea L., at Cranberry Bog Nature Preserve, Licking County, Ohio, was founded by a single individual transplanted to the bog in 1912. From an observation of the population in 1921, the intrinsic rate of increase for this population was estimated to be between .0016 and .0023 per day. A recent survey of the present size of the population revealed approximately 157,000 pitcher plants. These observations suggest that the population has not only reached the carrying capacity of Cranberry Bog, but that it did so as early as 1942. Comparisons between the intrinsic rate of increase for S. purpurea and the few other plant species that have been studied suggest that pitcher plants have a relatively slow rate of population increase for an herbaceous species.