Feldspar-Provenance Dates in a Stratigraphic Section of Till in Gahanna, Ohio 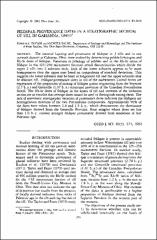 The internal layering and provenance of feldspar in 3 tills and in one outwash deposit at Gahanna, Ohio, were studied by determining pebble lithologies and Rb-Sr dates of feldspar. Variations in lithology of pebbles and in the Rb-Sr ratios of feldspar in the 125—250 micrometer fractions reveal discontinuities which divide the upper 2 tills into 2 subunits each. Each of the lower subunits appears to be more homogeneous than the upper ones based on comparisons of standard deviations. This suggests the lower subunits may be basal or lodgement till and the upper subunits may be ablation till. Feldspar-provenance dates in till of the mid western United States are expressions of the proportion of mixing of feldspar grains originating from the Superior (2.7 b. y.) and Grenville (1.07 b. y.) structural provinces of the Canadian Precambrian Shield. The Rb-Sr dates of feldspar in the layers of till and outwash of the Gahanna section are so variable that average dates cannot be used to distinguish among them. The lack of systematic stratigraphic variation of provenance dates indicates the feldspars are heterogeneous mixtures of the two Precambrian components. Approximately 90% of the dates have values between 1.0 and 1.5 b.y., which demonstrates the dominance of feldspar derived from the Grenville Province. Four samples whose dates are less than 1.0 b. y. contain younger feldspar presumably derived from sandstone of late Paleozoic age.

Author Institution: Department of Geology and Mineralogy and The Institute of Polar Studies, The Ohio State University