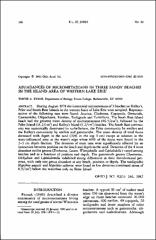 During August 1978 the interstitial micrometazoa of 3 beaches on Kelley's, Pelee and South Bass Islands in the western basin of Lake Erie were sampled. Representatives of the following taxa were found: Acarina, Cladocera, Copepoda, Ostracoda, Gastrotricha, Oligochaeta, Rotifera, Tardigrada and Turbellaria. The South Bass Island beach had the greatest mean density of micrometazoans (46.5/cm3), followed by the Pelee Island (14.2/cm3) and Kelley's Island (5.2/cm3) beaches. The South Bass community was numerically dominated by turbellarians, the Pelee community by rotifers and the Kelley's community by rotifers and gastrotrichs. The mean density of total fauna decreased with depth in the sand (70% in the top 1 cm) except at subsites in the wave-influenced zone at the water's edge where 60% of the fauna were found in the 2—3 cm depth fraction. The densities of most taxa were significantly affected by an interaction between position on the beach and depth in the sand. Densities of the 4 most abundant rotifer genera (Trichocerca, Lecane, Wierzjskiella and Cepbalodella) varied among beaches and as a function of position and depth. The gastrotrich genera Chaetonotus, Icbthydium and Lepidodermella exhibited strong differences in their distributional patterns, with only one genus abundant at any beach, position or depth. The tardigrades Hypsibius augusti and Hypsibius saltursus were found in low densities (combined mean of 0.5/cm3) below the waterline only on Pelee Island.