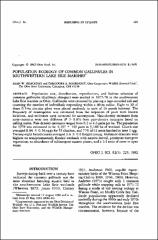 Population size, distribution, reproduction, and habitat selection of common gallinules (Gallinula chloropus) were studied in 1977-78 in the southwestern Lake Erie marshes in Ohio. Gallinules were censused by playing a tape-recorded call and counting the number of individuals responding within a 40-m radius. Eight to 30 of these 0.5-ha circular plots were placed randomly in each of 16 marsh habitats. The frequency of nonresponse was estimated from the responses of pairs with known locations, and estimates were corrected for nonresponse. Nest-density estimates from strip-transects were not different (P > 0.05) from pair-density estimates based on calling males. Pair-density estimates ranged from 0.2 to 4.6 pairs per ha. The population for 1978 was estimated to be 1,197 ± 149 pairs in 5,188 ha of wetland. Clutch size averaged 8.04 ± 0.56 eggs for 55 clutches, and 77% of 61 nests hatched at least 1 egg. Twenty-eight brood counts averaged 3.6 ± 0.6 fledged young. Gallinule densities were highest on semipermanently flooded wetlands with narrow-leaved, persistent emergent vegetation, an abundance of submergent aquatic plants, and a 1:1 ratio of cover to open water.