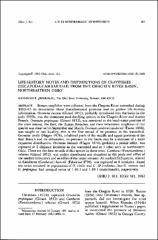 Stream crayfishes were collected from the Chagrin River watershed during 1963-65 to determine their distributional patterns and to gather life-history information. Orconectes rusticus (Girard 1852), probably introduced into the basin in the early 1930s, was the dominant pool-dwelling species in the Chagrin River and Aurora Branch. Orconectespropinquus (Girard 1852), was restricted to the head-water portions of the main stream, the East, the Aurora Branches, and their tributaries; amplexus of this species was observed in September and March. Orconectes sanbornii sanbornii (Faxon 1884), was caught at one locality; this is the first record of its presence in the watershed. Orconectes virilis (Hagen 1870), inhabited pools of the middle and upper portions of the East Branch and its tributaries; its presence in the basin may be a remnant of a more expansive distribution. Orconectes immunis (Hagen 1870), probably a prairie relict, was captured at 2 disjunct localities in the watershed and at 3 other sites in northeastern Ohio. These are the first records of this species in these areas. Cambarus (Puncticambarus) robustus (Girard 1852), was widely distributed and abundant in the pools and riffles of the smaller tributaries and in riffles of the larger streams. An undescribed species, related to Cambarus {Cambarus) bartonii (Fabricius 1798), was captured at 8 localities. Equal sex ratios occurred in populations of 0. virilis and C. (P.) robustus, but 0. rusticus and 0. propinquus had unequal ratios of 1.30:1 and 1.49:1 (male:female), respectively.