Coronary Arterial Circulation in the Bantu 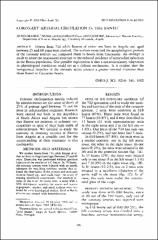 Hearts from 710 adult Bantus of either sex born in Angola and aged between 25 and 68 years were studied. The authors examined the morphological pattern of the coronary arteries and compared them to hearts from Caucasians. An attempt is made to relate the anatomical structure to the reduced incidence of myocardial infarction in the Bantu population. One possible explanation is that a microcirculatory adaptation to physiological conditions could act as a defense mechanism. It is evident that the intraparietal branches of the coronary artery present a greater internal diameter than those found in Caucasian hearts.