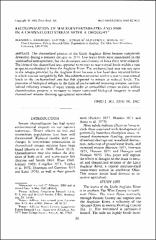 The channelized portion of the Little Auglaize River became completely dewatered during a summer drought in 1974. Low water levels were maintained in the undisturbed area upstream, but the abundance and diversity of biota there were reduced. The biota of the channelized area appeared to recover to near normal levels within a year as species recolonized it from the Auglaize River. The unchannelized area was not open to the refugia provided by the Auglaize River because a low head dam occurred below it which was not navigable by fish. Macrobenthos recovered within a year to near normal levels in the unchannelized area but fish appeared to remain at reduced levels. The provision of biological refugia in the form of unchannelized receiving streams, unchannelized tributary streams of equal stream order or unmodified stream sections within channelization projects is necessary to insure continued biological integrity in small channelized streams draining agricultural watersheds.