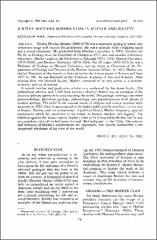 Kirtley Fletcher Mather (1888-1978) was a renowned geologist whose contributions range well beyond the geosciences. He was a scientist with a religious spirit and a social conscience. He graduated from Denison University in 1909, received the Ph. D. in Geology from the University of Chicago in 1915, and was awarded 6 honorary doctorates. Mather taught at the University of Arkansas (1911-1914), Queens University (1915-1918), and Denison University (1918-1924). For 30 years (1924-1954) he was a Professor of Geology at Harvard University, serving terms as Chairman of the Department of Geology and Director of the Harvard Summer School. In 1951, Mather was elected President of the American Association for the Advancement of Science and from 1957 to 1961 he was President of the American Academy of Arts and Sciences. After retiring from the Harvard faculty, Mather continued to be very active as a lecturer, reviewer, and social activist. A superb teacher and productive scholar — as evidenced by his dozen books, 250 professional articles, and 1,200 book reviews—Kirtley Mather was an exemplar of the interdisciplinary approach to understanding the world. His geologic writings concerned geomorphology, petroleum geology, paleontology, and popularizations of all phases of modern geology. His belief in the mutual merits of religion and science received wide attention in 1925 when he participated in the highly publicized Scopes Trial, on the side of Scopes, Darrow, and the evolutionists. A political liberal, Mather frequently opposed movements which he considered to be threats to human freedom and dignity. The rebellion against the Massachusetts Teacher's Oath of 1935 was led by Mather and he was an outspoken critic of the McCarren Act and McCarthyism in the 1950s. The volume and diversity of Mather's achievements are impressive, but equally noteworthy is the integrated wholeness of his view of the world.