Effects of Water Quality on Fish and Macroinvertebrate Communities 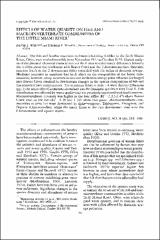 The fish and benthic macroinvertebrates inhabiting 6 riffles in the Little Miami River, Ohio, were studied monthly from November 1977 to October 1978. Cluster analysis of the physical-chemical characteristics of the 6 sites revealed major differences between the 4 riffles above the confluence with Beaver Creek and the 2 downstream sites. Increased nutrient levels in the 2 downstream riffles coincided with the influx of domestic sewage. Moderate increases in nutrients had little effect on the composition of the biotic communities; however, sharp increases in nutrient levels from sewage plant effluents discharged into Beaver Creek resulted in downstream changes in the species composition of fish and macroinvertebrate communities. The dominant fishes at sites 1-4 were darters (Etheostoma spp.); the stoneroller (Campostoma anomalum) was the dominant species at sites 5 and 6. Fish distribution was affected by water quality and was positively correlated with food densities. Macroinvertebrate diversity was higher in the four riffles (H'= 2.22-2.47) above Beaver Creek than in the two (H' = 1.19 and 1.24) below this point. Macroinvertebrate commuinities at sites 1-4 were dominated by Ephemeroptera, Trichoptera, Plecoptera, and Diptera (Chironomidae), while the major forms at the two downstream sites were the Chironomidae and aquatic worms.