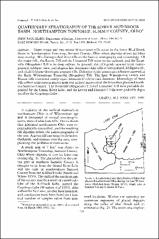 Three major and two minor Wisconsinan tills occur in the lower Mud Brook Basin in Northampton Township, Summit County, Ohio where deposits of two ice lobes may overlap. We distinguished these tills on the basis of stratigraphy and mineralogy. Of the major tills, the Lavery Till and the Unnamed Till occur on the uplands, and the Titusville (Mogadore) Till is in deep valleys. In general, the tills grade upward from coarsegrained, feldspar-poor, and plagiosclase-dominant older tills to fine-grained, feldspar-rich, and alkali feldspar-dominant younger tills. Dolomite is the dominant carbonate mineral in the Early Wisconsinan Titusville (Mogadore) Till. The Late Wisconainan Lavery and Hiram tills contained nearly equal amounts of calcite and dolomite. Mineralogy of these tills reflect variations in source areas and in local materials of the lobes that glaciated northern Summit County. The Titusville (Mogadore) Till and Unnamed Till were probably deposited by the Grand River Lobe, and the Lavery and Hiram (?) Tills were probably deposited by the Cuyahoga Lobe.