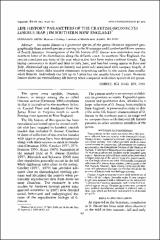 Orconectes limosus is a primitive species of the genus Orconectes separated geographically from related species occurring in the Mississippi and Cumberland River systems of North America. Investigation of the life history of 0. limosus was undertaken near the northern limit of its distribution along the Atlantic coast. In southern New England, the species copulates any time of the year when active first form males confront females. Egg laying commences in April and lasts to early June, and hatched young appear in June and July. Abdominal egg counts are linearly and positively associated with carapace length. A trend exists where older females commence ovipositing earlier in the season than smaller adult females. Individuals can live up to 3 years but not usually beyond 2 years. Orconectes limosus shows no extraordinary life history when compared with other species of the genus