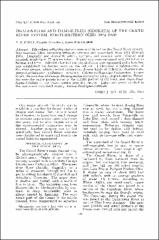 Fifty-three collecting stations were established on the Grand River system, Northeastern Ohio, including tributary streams and watershed, from 1974 through 197S. Dragonfly and damsel fly adults, nymphs, and exuviae were collected and counted, resulting in 77 species taken. Populations were measured and plotted as to habitat and time. Selected chemical and physical data were measured and a base-line was established for further work on the subject. I identified (> habitat-areas of the river proper, which yielded distinctive, diverse kinds of Odonata: Boyeria-Calopteryx- Cordulegaster (tributary streams), Calo pleryx-Hagenius-X asiaeschna (upper river), Basiaeschna-Didymops-Dromogomphus (transition area), Argia-Gomphus-Hetaerina were the major genera found at the middle portion of the river, and Argia-Knallagma-Libellula at the lower portion near the mouth. Lakes and ponds studied in the watershed contained mainly Aeshna-linaUagma-IJbellula.