An Ordination of the Forest Herb Stratum of Abner's Hollow, South-Central Ohio 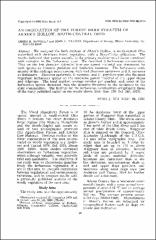 We analyzed the herb stratum of Abner's Hollow, a south-central Ohio watershed, with deciduous forest vegetation, with a Bray-Curtis ordination. The results indicated that parent material is the primary environmental factor correlated with variation in the herbaceous layer. We described 3 herbaceous communities. That on the low elevation dolomite/limestone parent material was dominated by such species as Uvularia perfoliata and Smilacina racemosa. The herbaceous community of the midslope noncalcareous shale had Dio score a quaternaia and S. racemosa as dominants. Dioscorea quaternata, S. racemosa, and U. perfoliata were also the most important herbaceous species on the sandstone parent material of the upper slopes and ridgetops. The total number, average number per quadrat, and cover of the herbaceous species decreased from the dolomite/limestone to the sandstone to the shale communities. The findings for the herbaceous communities complement those of the study published earlier on the woody plants (Bot. Gaz. 139: 241-248, 1978).