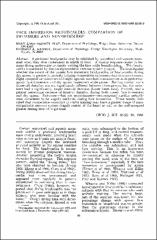 A profound bradycardia may be exhibited by waterfowl and aquatic mammals when they dive underwater in search of food. A similar response occurs in humans diving underwater or simply wetting the face while breathholding. This bradycardia is mediated by the parasympathetic nervous system (vagus). We investigated whether the extent of this apneic face immersion bradycardia, or bradycardia during dry apnea, is greater in actively training competitive swimmers than in nonswimmers. Eight competitive swimmers and eight age/sex matched nonswimmers each performed apneic face immersion and dry apneic maneuvers while prone. Resting cardiac cycle (interval) duration was not significantly different between these groups, but the swimmers had a significantly longer interval duration (lower heart rate), P<0.05, and a greater percentage decrease of interval duration during both apneic face immersion and dry apnea. Swimmers—but not nonswimmers—demonstrated cardiac arrhythmias considered to be vagally mediated during face immersion. These results indicated that competitive swimmers in active training may have a greater range of parasympathetic nervous system (vagal) control of the heart as well as the well-accepted greater resting level of vagal tone.