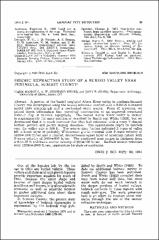 A portion of the buried preglacial Akron River valley in northern Summit County was investigated using the seismic refraction method with a BISON 6-channel model 1580 seismograph and a mechanical shock source. From 42 traverses, we gained depth information that permitted construction of an improved structural contour map of bedrock topography. The buried Akron River valley is located in approximately the same position as described by Smith and White (1953), but we determined that it is much narrower than they had estimated with a steep V-shaped bottom portion and gently sloping shoulders. The approximate depth to bedrock over the valley axis is 500 ft. The seismic data further indicated 2 types of valley fill: a lower layer of probably Wisconsinan glacial material with P-wave velocity of 5700 =*= 1400 ft/sec and a thinner, discontinuous upper layer of uncertain nature with P-wave velocity of 2600^600 ft/sec. The weathered zone ranges in thickness from 4 ft to 32 ft and has a seismic velocity of 800 ± 160 ft/sec. Bedrock seismic velocities were 12000=^=2000 ft/sec, appropriate for shale or sandstone.