Strategies for Scientific Literacy in Undergraduate Education for Non-Science Majors 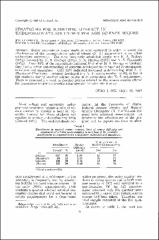 Senior non-science major students were surveyed in order to assess the effectiveness of the undergraduate natural science (N. S.) requirement at an urban mid western university. The most frequently scheduled course was N. S. Biology (30%) followed by N. S. Geology (20%), N. S. Physics (20%) and N. S. Chemistry (18%). Over 40% of the respondents indicated that after N. S. Biology or Geology, they had a better understanding of scientific developments as reported in newspapers, television and magazines. Only 25% indicated increased understanding after N. S. Physics or Chemistry. Interest developed in a N. S. course resulted in 6% or less of the students taking another science course after completing the N. S. requirement. There is apparently a need to develop greater interest in the science courses offered for non-science majors to provide a background for scientific literacy.