Development and Replacement Order of Pharyngeal Teeth in the Golden Shiner, Notemigonus Crysoleucas 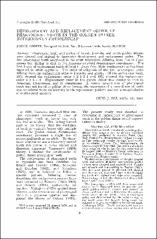