Movements of the Creek Chub in a Small Ohio Stream 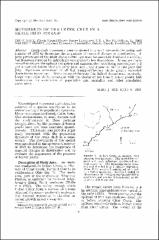 Creek chub movements were monitored in a small stream in the spring and summer of 1972 to determine the magnitude of seasonal changes in distribution. A large percentage of the adult chubs moved upstream between late April and mid-May, but distances traveled by individuals were generally less than 300 m. Immature chubs moved upstream throughout the spring and summer, the catch being predominantly 2 and 3 year old fish in May and early June, and 1 and 2 year old fish in late June and July. Upstream movement of all but young-of-the-year chubs greatly exceeded downstream movement. Some young-of-the-year fish drifted downstream passively. Large population shifts, associated with the exodus of fish from 2 beaver ponds, had implications for estimation of population size, mortality and other population parameters.