Transport of Dredged Sediments After Disposal Operational in Lake Erie 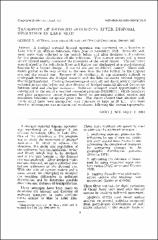 A dredged material disposal operation was monitored on a location in Lake Erie 8 km offshore Ashtabula, Ohio, June to November, 1975. Some 200 sediment cores were collected in the periods before and after dredging and analyzed for the grain-size distribution of the sediments. Two current meters and a wave sensor moored nearby monitored the movement of the water masses. The sediments were dredged in the Ashtabula River and Harbor and discharged at a pre-designated location by a hopper dredge. A control site was established nearby. These sediments proved to be very similar to the ones from the lake bottom at the disposal site and the control site. Because of this similarity, it was extremely difficult to distinguish between the dredged material and the lake sediments without tagging the dredged material. Plotting the percentage of sand, silt and clay in several replicates collected at one site before and after disposal of dredged material allowed distinction between local and dredged sediments. Sediment transport could approximately be determined by the use of a modified computer program (SEDMOT), which calculates and plots progressive vector diagrams based on pre-assigned critical erosion and deposition velocities for specific grain sizes. The results showed that silt-sized sediments could have been transported over distances as large as 20 km. The main direction of transport was northeast and southwest, following the bottom topography.