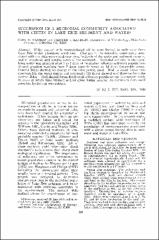 Slides coated with reprecipitated chitin were buried in sediments from Lake Erie under laboratory conditions. Changes in the microbial community associated with the slide were noted over time, in depth of the water and sediment column, and in anaerobic and aerobic zones of the sediment. Bacterial activity in the overlying water was greatest after 2 to 7 days of incubation whereas sediment populations showed greatest numbers from 7 days (aerobic zone) to 13 days (anaerobic zone). Control slides showed no change in the time period used. Rod to ovoid forms predominated in the water regime and eventually (20 days) showed no difference from the control slides. Rod-shaped forms dominated sediment population up to approximately 10 days at which time vibrioid and/or spiral forms became the dominant flora until complete hydrolysis was evident.