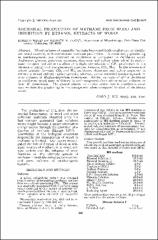 Mixed cultures of anaerobic bacteria fermented both coniferous and deciduous wood sawdust, with concomitant methane production. A consistently greater lag in methanogenesis was observed on coniferous as compared to deciduous wood. Arabinose, glucose, galactose, mannose, rhamnose and xylose when added to enrichment cultures had either no effect or a slight stimulation of CH4 production in the absence of added methane precursors (acetate, formate, CO2, H2). In the presence of added acetate, formate, CO2 and H2; arabinose, rhamnose and xylose appeared to stimulate mixed culture methanogenesis; whereas, xylose retarded methanogenesis in pure cultures of Methanobacterium formicicum. Alcohol extracts of either deciduous or coniferous wood were inhibitory to methanogenesis from either mixed cultures or from M. formicicum. The greater amount of alcohol extractives in coniferous wood may explain the greater lag in methanogenesis when compared to that of deciduous wood.