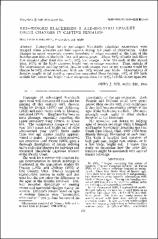 Twenty-four female red-winged blackbirds (Agelaius phoeniceus) were trapped when juveniles and held captive during 3.5 years of observation. Color changes in upper secondary coverts (epaulets) of wings occurred at the time of the late-summer molt of the birds' first and second years. About 84% of birds had dilute rust epaulets after their first molt; 16% had orange. After the molt of the second year, 100% of the birds acquired bright rust or orange epaulets. Thus, outside of the later-summer molting period, females with orange, rust or red epaulets would by chance be 86% after-second-year birds and 14% second year birds. Observations of females caught in fall banding operations supported these findings; 10% of 109 birds in their first winter had bright rust or orange epaulets, and 90% had dilute rust epaulets.