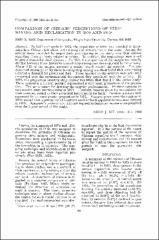 In 1970 and again in 1975, the population of Ohio was sampled to determine how Ohioans felt about strip mining and reclamation in the state. Among the several items provided by respondents participating in the study was their opinion regarding these 2 closely related activities. In addition, the respondents were asked to give a reason for their opinions. In 1970, the proportion of the sample was equally divided between those favorable toward strip mining and those opposed to the activity. About 0.25 of the sample assumed a neutral stand toward the concept. The predominant reason given by those favoring strip mining was their belief that strip mining satisfied a demand for power and fuel. Those opposed to the activity were primarily concerned over the environmental destruction they associated with the activity. In 1975, the proportion favoring strip mining was twice that found in the earlier study. Those assuming a neutral position represented a very small proportion of the population. The same reason for favoring the activity predominated. Positive opinions on reclamation were overwhelming in 1970. However, reasons given by respondents for their opinions varied as they perceived future needs for land. Positive opinions were expressed by an even greater proportion in 1975. Reasons given were the same as in 1970, except that a perception of a current need for land appeared in responses received in 1975. Apparently, opinions on strip mining and reclamation became more polarized over the 5 year period of the study.