Effects of Hunting on Hunter Effort and White-Tailed Deer Behavior 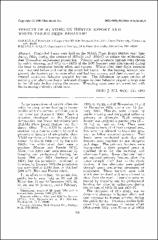 Controlled hunts were held on the NASA Plum Brook Station near Sandusky, Ohio, during the winters of 1975-76 and 1976-77 to reduce the white-tailed deer (Odocoileus virginianus) population. Primary and alternate hunters were chosen by public drawing, and 57% (n = 1423) of the 2497 hunters were interviewed during the hunt to determine hunter effort and success. White-tailed deer flight reaction was measured before and during the controlled hunts. As the hunting seasons progressed, the hunters put in more effort and had less success, and deer showed an increased avoidance behavior towards humans. The differences between results of morning and afternoon hunts indicated changes in deer behavior played a large role in the kill-rate decline during the season. Wounding rates were not correlated with the increasing difficulty of the hunt.