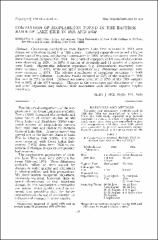 Crustacean zooplankton from Eastern Lake Erie collected in 1974 were compared with those found in a 1928 survey. Calanoid copepods composed a higher percentage of the total zooplankton community in 1928, whereas cyclopoids were the more important component in 1974. Nine taxa of copepods and 9 taxa of cladocerans were observed in 1928. In 1974, 8 species of copepods and 11 species of cladocera were found. Oligotrophic indicator organisms (e.g. Limnocalanus macrurus) were more common in 1928, while eutrophic indicators (e.g. Diaptomus siciloides) were more common in 1974. The relative abundances of organisms occurring in both years were very different. Leptodora kindtii occurred in 55% of the samples in 1928 but only in 22% in 1974. Daphnia retrocurva occurred in 12% of the 1928 samples but in 90% of the 1974 samples. Changes in the occurrence and abundance of these and other organisms may indicate their association with different aquatic trophic conditions.