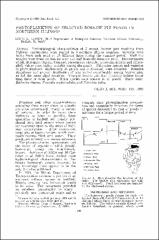 Hydrobiological characteristics of 7 recent borrow pits resulting from highway construction were studied in 5 northern Illinois counties. Samples were taken from each pond at 10 different dates during the summer period. Half the samples were from the littoral zone and half from the limnetic zone. Measurements of pH, Biological Oxygen Demand, phosphorus, chloride, ammonia, nitrate and chlorophyll values were highly variable among the ponds. Fifty-nine species and varieties of phytoplankters, representing 38 genera and 5 divisions, were recorded. Relative abundance and general distribution of taxa varied considerably among borrow pits, as did the mean algal densities. Younger borrow pits had diversity indices lower than those of older ponds. Three species were present in all ponds. These were: Eudorina elegans, Navicula cryptocephala, and Nitzschia palea.