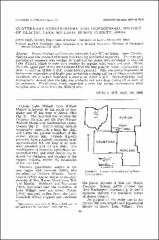 Several borings and trenches across the Lake Willard Basin, Huron County, Ohio showed the presence of at least 2 tills and 2 glaciofluvial sequences. The youngest glaciofluvial sequence was overlain by marl and lacustrine silts correlated to classical Lake Willard, which in turn were overlain by organic soils, muck and peat. Wood from the upper part of the marl indicated that the lake possibly began to evaporate or drain as early as 12,500 Y.B.P. (years before present). Silts containing fragments of herbaceous vegetation and finally peat containing a stump and log of Thuja occidentalis (northern white cedar) indicated a swamp at 9,810 Y.B.P. Geomorphology and stratigraphy showed that the lake was probably not very deep during all or most of its existence. Fossiliferous marls suggested a very low energy environment after complete retreat of ice from the Willard area.