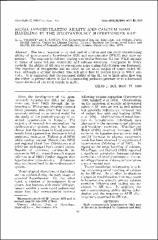 The renal response to an oral load of calcium and the renal concentrating ability of spontaneously hypertensive (SH) and normotensive (WKY) rats were examined. The response to calcium loading was similar between SH and WKY animals in terms of urine volume, osmolality and calcium excretion. Compared to WKY controls, the ability of SH rats to concentrate urine during dehydration was decreased. The injection of vasopressin had no effect on the urine output of water-loaded SH rats, although a similar injection returned urine flow to control levels in WKY animals. It is suggested that the decreased ability of the SH rat to limit urine flow was due either to pressor effects of ADH in increasing perfusion pressure or to a decreased responsiveness of the renal tubule to ADH.