Feeding Interrelationships Between the Sand Shiner and the Striped Shiner 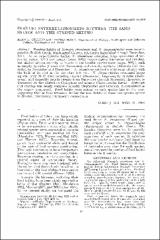 Feeding habits of Notropis stramineus and N. chrysocephalus were investigated in Buffalo Creek, Washington County, PA during September through December, 1977. As an opportunistic feeder, N. stramineus consumed large quantities of terrestrial (appx. 40%) and aquatic (appx. 50%) insects during September and October, but shifted almost entirely to insects in the benthic environment (appx. 90%), such as mayfly nymphs (Caenis and Stenonema) and stonefly nymphs (Alloperla and Isoperla), in November and December. N. stramineus utilized a wide range of prey with the bulk of its diet in the size class 5-8 mm. N. chrysocephalus consumed larger aquatic prey (9-12 mm) including crayfish (Orconectes), large mayfly nymphs (Stenonema), and damsehiy naiads (Argia) from September through November; however, in December its diet shifted to Cladophora and aquatic Chironomidae larvae. Although diet overlap was nearly complete initially (September and October), it diminished as the season progressed. Food habits were unique to each species late in the year, suggesting that as food resources decline the food habits of these two species appear to diverge, minimizing interspecific competition.