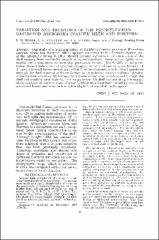 Our study of a large population of the Pennyslvanian gastropod Microdoma conicum Meek and Worthen, which appears restricted to the Vanport marine unit of the Allegheny Group in Ohio, showed extreme variation in ornamentation of the shell ranging from essentially smooth to coarsely nodose. Smooth and lightly ornamental forms were more common than previously known. Nearly 38% of the population showed indications of external biological activity of one or a combination of 3 types: (1) small hemispherical pits, 0.1-0.2 mm in diameter, which did not penetrate through the shell material and were formed by an unknown passive epifaunal element while the host was alive; (2) borings, 0.2-0.3 mm in diameter, which passed through the shell and possibly were made by another gastropod (3) shell damage along the margin of the aperture at various stages of growth, which may have been caused by one of the associated faunal elements such as echinoids, fish, or nautiloid cephalopods.