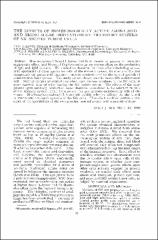 N-a-benzyloxycarbonyl-L-lysine had been shown to possess an immunosuppressive effect, and N-acetyl-D-glucosamine an enhancing effect on the production of IgG and IgM in mice. We studied mechanisms for these effects including a) possible specificity of these agents for cells of the immune system, b) effects of the test compounds on amino acid transport, protein synthesis and/or the rate of growth of some other cellular system. The study system chosen was the mouse S37 ascites tumor cell. Neither compound exerted any effect upon protein synthesis in the S37 cells, or upon survival time of mice bearing the S37 ascites tumor. The effects of the compounds upon antibody production were, therefore, considered to be selective to cells of the immune system rather than general for any actively-metabolizing cells of the mouse. N-a-benzyloxycarbonyl-L-lysine did exhibit selective affinity for the L and A amino acid transport systems of the S37 cells. This effect modified previous concepts of the specificities of the two principal neutral amino acid transport systems.