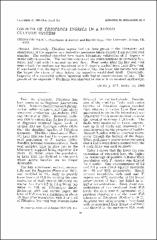 Previously, Thioploca ingrica had not been grown in the laboratory and observation of the organism was limited to specimens taken directly from natural mud samples. The method described here makes laboratory cultivation of T. ingrica in mixed culture possible. The medium consists of low concentrations of extracted hay, water, and mud with its natural bacterial flora. Four weeks after the hay and mud were mixed, the medium was inoculated with T. ingrica washed from Lake Erie mud. It was found that the higher the concentration of hay, the lower the success rate and the longer the elapse of time before the organism established itself. Conversely, longevity of a successful culture improved with higher concentrations of hay. The growth of the organism in the flasks was observed in situ with an inverted microscope.