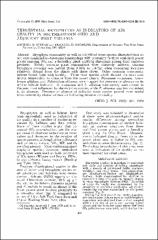 Bryophyte community as well as individual moss species characteristics on soil were examined to determine relationships with proximity to three coal-fired power plants emitting SO2 and a ferroalloy plant emitting chromium among their emission products. Woody vascular plant communities were relatively uniform, whereas bryophyte coverage was halved (from 3.36% to 1.47%) when comparing locations relatively distant from the plants with those closer. Other common community indices varied little with locality. Three moss species which showed the most consistent relationship to distance from the power plants, Dicranum scoparium, Leucobryum albidum, and Polytrichum ohioense, were mapped for presence or absence on 68 similar hillside habitats. D. scoparium and L. albidum consistently were absent in the area most influenced by the emission sources, while P. ohioense was less consistent in its absence. Presence or absence of indicator moss species proved more useful than community characteristics for indicating relative air quality.