Changes in the Stability Characteristics of Ohioans' Attitudes Toward Strip Mining, 1970-75 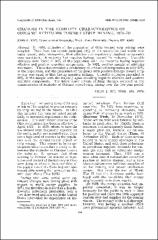