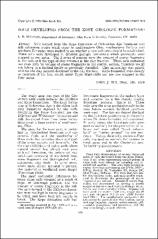 Soils formed from the Kope formation of Ordovician Age limestone and soft calcareous shales which occur in southwestern Ohio, southeastern Indiana and northern Kentucky were studied to see whether a new soil series should be established. These soils were developed in different geologic formations which previously were mapped as one series. The 2 areas of concern were the amount of coarse fragments in the soils and the type of clay minerals in the clay fraction. These soils contained less than 35% by volume of coarse fragments in the control section, therefore would not belong in a skeletal family as previously classified. Clay mineralogy was mixed, with no one clay mineral dominant in the clay fraction. Kope formation soils classify as members of the fine, mixed, mesic Typic Hapludalfs and are now mapped as the Pate series.