Areal Variation in the 1976 Presidential Vote: A Case Study of Akron 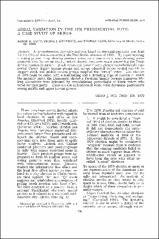 A comprehensive, city-wide analysis, based on electoral precincts, was done for the City of Akron concerning the Presidential election of 1976. By superimposing a voting pattern map showing precinct votes, on a census data map showing socioeconomic data by census tracts, certain observations were made concerning the Presidential election in Akron. Black voters and lower income groups overwhelmingly supported Carter, higher income groups and college educated voters tended notably to support Ford, and middle income groups supplied the swing votes. The election of 1976 could be called both a maintaining and a deviating type of election in which the majority party, the Democrats, elected a President largely because numerous lifelong Democrats were bolstered by overwhelming percentages of black voters who voted for their party. There are also indications of white voter deviation, particularly among middle and upper income groups.