Summary of Investigations in Late Paleozoic Geology of Ohio 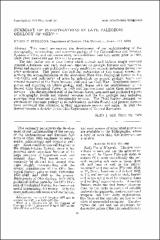 This report summarizes the development of our understanding of the stratigraphy, paleontology and economic geology of the Carboniferous and Permian Systems of Ohio, and can conveniently be divided into four time units: prior to 1869, 1869-1900, 1900-1949 and 1949 to the present. The first period was a time during which animals and Indians sought essential mineral substances and early explorers reported on geologic features and resources. Notes and reports were published on newly established mineral industries during and after settlement. This period also included publication of two annual reports describing the accomplishments of the short-lived First Ohio Geological Survey in the mid-1830's and publication of notes by individuals on general geology, fossils and mineral resources of the State between 1840 and the Civil War. Systematic investigation and reporting on Ohio's geology really began with the establishment of the Second Ohio Geological Survey in 1869 and has continued under three subsequent surveys. The distinguished staff of the Second Survey prepared and published reports on stratigraphy, fossils and mineral resources and the first geologic map including accompanying structure and stratigraphic sections. The Third Survey increased the emphasis on economic geology in its publications, and the Fourth and present Surveys have continued this attention in their appropriate reports and maps. In 1949 the Survey became a division in the Ohio Department of Natural Resources.