A Brief History of the Ohio Geological Survey 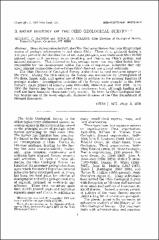 Since its inception in 1837, the Ohio Geological Survey has been the principal source of geologic information in and about Ohio. These data, gathered during a 141-year period under the direction of ten state geologists, constitute more than 30,000 printed pages and numerous maps describing and illustrating Ohio's geology and mineral resources. This information has, perhaps more than any other factor, been responsible for the development within the state of important industries that rely upon mineral commodities derived from Ohio's bedrock and glacial sediments. The Ohio Division of Geological Survey is the oldest natural resources agency in the state. During the 19th century the Survey was responsible for investigation of the flora, fauna, soils, and agriculture of Ohio in addition to the primary function of geologic studies. Investigative activities of the Survey were sporadic in the 19th century; major periods of activity were 1837-1838, 1869-1874, and 1882-1893. Since 1900 the Survey has been maintained on a continuous basis, although funding and staff size have remained characteristically modest. In 1949 the Ohio Geological Survey became one of the seven originally chartered divisions of the Ohio Department of Natural Resources.