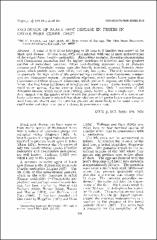 A total of 4175 fishes belonging to 29 taxa in 6 families was examined for black spot disease. Of that total, 89% were infected with one or more metacercariae of the strigeid fluke, Uvulifer ambloplitis. Rhinichthys atratulus, Semotilus atromaculatus and Campostoma anomalum had the highest incidence of infection and the greatest number of individual parasites. Other pool-dwelling minnows such as Notropis cornutus and Pimephales notatus were also heavily infected, whereas Noiropis photogenus, which prefers deep, swift riffles, had very few cysts. The only non-minnows to approach the high totals of the pool-dwelling cyprinids were Catostomus commersoni and Etheostoma nigrum. Hypentelium nigricanz, which prefers faster water than Catostomus and three species of Etheostoma, which, unlike E. nigrum, are rime dwelling forms, also had lower incidences of infection and fewer cysts. Coitus bairdi, another rapid water species, did not develop black spot disease. Only 1 specimen of 225 Ericymba buccata, which occur over shifting, sandy bottoms, had a single cyst. Our data suggest that the species which inhabit the slower flowing waters of a stream are likely to be more heavily infected than their relatives which prefer faster water because snail hosts are absent and any cercariae present are more likely to be swept away in rapid water and thus have less of a chance to penetrate a host.