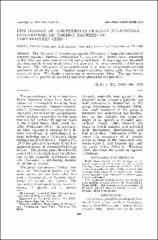 The life cycle of Acropteroxys gracilis (Newman), a languriid associate of common ragweed, Ambrosia artemisiifolia L., was studied. Adults began appearing in late May and were most abundant during mid-June. A single egg was deposited per stem, usually in the basal third of the stem and the larva tunneled and fed upon the pith. The fully-grown larva overwintered in a state of temperature-induced quiescence within the stem. Pupation usually occurred during early May in the excavated stem. The beetle is univoltine in northeastern Ohio. The egg, larvae, and pupa of A. gracilis are described and/or illustrated for the first time.