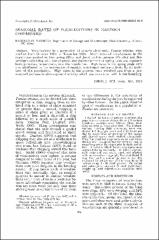 Vocalizations in a population of eastern chipmunk, Tamias striatus, were studied from October 1973 to November 1976. Mean rates of vocalizations in the population peaked in late spring (May and June) and in autumn (October and November) coinciding with the dispersal and the recruitment of spring-born and summerborn juveniles, respectively, into the population. High rates in the spring peak were also attributed to the resumption of regular, post-torpor surface activity by all members of the population. High rates in the autumn peak resulted also from a pronounced increase in above-ground activity which was associated with larder hoarding.