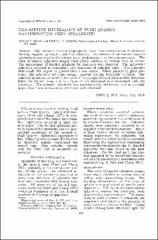 The Devonian rocks at Pugh Quarry have three distinct types of sphalerite (banded massive, spheroidal, and tiny euhedral). Occurrence of the banded massive sphalerite is restricted to the mineral zone, predominantly as blebs in marcasite. The color of banded sphalerite ranged from nearly colorless to various hues of yellow. The replacement of banded sphalerite by marcasite was observed. The spheroidal sphalerite occurred in association with marcasite of euhedral habit. The spherules were small, the largest no greater than 1 mm across. Where present in great profusion, the sphalerite spherules merged together forming botryoidal surfaces. The euhedral sphalerite occurred in the voids of the sponge-like and stromatolitic dolostone below the mineral zone, and in a layer of soft laminated mud associated with the dolostone. The euhedral sphalerite was predominantly red-brown, and no crystals larger than 1 mm in maximum dimension were observed.