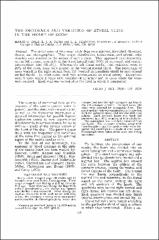 The atrial veins of 40 normal adult dogs were injected, identified, dissected, drawn, and photographed. Their origin, distribution, termination, and arterial relationship were studied on the surface of each atrium. They appeared most frequently on the left atrium, especially in the dorsal lateral third (85%> of the cases), and ventral intermediate third (32.5%). Whereas the left dorsal medial third exhibited veins in 25% of the cases, none were present in the ventral medial third. The percentage of cases varied in the right atrium from 5% (ventral intermediate third) to zero (dorsal medial third). In most cases, each vein accompanied an atrial artery. Exceptions were 3 cases where 2 veins were satellites of an artery and 1.6 cases where the veins were isolated. Each vein was named after the third in which it terminated.