Chemistry in the Old Northwest 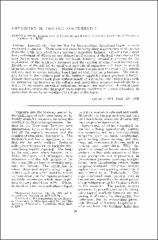 Immediately after the War for Independence, Americans began to move westward in earnest. There were numerous factors pulling migrants westward, among them the fertile land which had a particular appeal for farmers. Ohio felt the impact first; settlement of Wisconsin was delayed until opening of the lead mines during the later Indian wars. Settlers in the Northwest Territory revealed a penchant for the exploitation of the territory's resources and the creation of educational institutions. Excellence of the soil led to significant agricultural expansion and, later, to growth of an innovative food industry. Mineral resources stimulated the growth of a metals industry and an energy industry based first on coal, then on petroleum. The extensive forests in the northern part of the territory supplied a forest products industry. Pioneer developments took place without benefit of science but after 1850 science took on increasing significance as the colleges and universities prepared individuals for a role in the innovative growth of agriculture, industry, and medicine. A critical question revolves around the disproportionate regional excellence in science (chemistry in particular) shown by universities and colleges of the region.

Author Institution: Departments of Chemistry and History of Science, University of Wisconsin