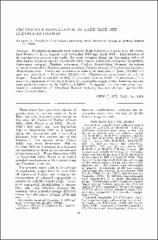 Zooplankton samples were collected from 5 stations in Lake Erie off Cleveland Harbor in June, August, and November 1973 and April 1974. Identification of 26 zooplankton groups was made, the most common being (in decreasing order of abundance) copepod nauplii, bosminids with mucro, immature cyclopoid copepodids, Eubosmina coregoni, Daphnia retrocurva, Cyclops bicuspidatus thomasi, immature calanoid copepodids, Daphnia galeata mendotae, Cyclops vernalis, Ceriodaphnia lacustris, Mesocyclops edax. Crustacean zooplankton were most abundant in June (158,000/m3) and least abundant in November (27,600/m3). Cladocerans were dominant only in August. Nauplii accounted for 82% of all zooplankton in April. Comparison of the seasonal abundance of immature dipatomid copepodids suggests that breeding seasons were probably similar in the 1950's and 1970's. It appears that the crustacean zooplankton community off Cleveland Harbor probably has not changed significantly since the mid-1950's.