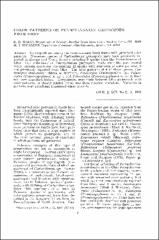 Gastropods are among the more common fossil forms with preserved color patterns. Numerous species of Carboniferous gastropods have been previously reported in Europe and North America including 9 species from the Pennsylvania!! of Ohio. Our collections of Pennsylvanian gastropods, made over the past several years, contain specimens representing 11 species with remnants of color patterns, 9 not previously reported from Ohio. The color patterns of 4 of these species, Ianthinopsis intercalaris? (Meek & Worthen), Palaeostylus (Paleostylus) n. sp., Palaeosiylus {Pseudozygo pleura) n. sp. 1 and Palaeostylus {Pseudozy go pleura) n. sp. 2, have not been described before. Comparisons were made between Ohio gastropods with color patterns, or closely related forms, and those reported elsewhere. Variation in patterns were noted and illustrated where possible.