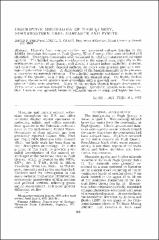 Minerals from solution cavities and associated collapse breccias in the Middle Devonian dolostone at Pugh Quarry, Wood County, Ohio were collected and identified. Two types of marcasite were recognized: banded encrustations and euhedral crystals. The banded marcasite is widespread in the mineral zone, especially in the northeastern section of the Quarry, and showed 3 distinct habits: subhedral, globular, and columnar. On freshly exposed surfaces, the colors were greenish gray or a mixture of pale yellow and gray. A characteristic of the banded marcasite is the presence of extensive intergrowth twinning. The euhedral marcasite was found in rocks in all parts of the Quarry, both inside and. outside the mineral zone. On freshly broken surfaces, the euhedral crystals were gray-white with a greenish cast. Prismatic and tabular habits were observed. Many of the crystals showed hopper development. Pyrite is not a common mineral in Pugh Quarry. Generally, crystals were small, less than 1 mm in size, greenish brown to yellowish brown in color, and highly lustrous.