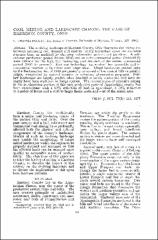 The evolving landscape of Harrison County, Ohio illustrates the interaction between increasing coal demand and modern mining technology upon the available resource base, as modified by changing reclamation policies and practices. A subsistance production period (before 1915) and an early commercial period (1916-1940) were followed by the high, but fluctuating, coal demands of the current commercial period (1941 to present). Post-war technology has enabled less accessible and/or commercial reserves to be mined over larger areas. Mined landscapes created prior to the Reclamation Act of 1949 are generally composed of low conical hills or parallel ridges, revegetated by natural invasion or voluntary aforestation programs. Postlaw landscapes are largely graded, often benched or gently contoured, and more recently have been replanted in forage species. The concentration of extensive mining in the southeastern portion of this once productive pastoral Appalachian county has been concomitant with a 50% reduction of land in agriculture, a 70% reduction in number of farms and a shift to larger farms north and west of the mined area.